Reviewers found this study to be potentially informative to not informative, highlighting several gaps in the study design and reporting of results that render it difficult to draw meaningful conclusions from the preprint without major clarification or further research.

On July the 23rd, 2022, The World Health Organisation (WHO), declared the 2022 monkeypox outbreak a Public Health Emergency of International Concern1. More than 50000 cases have been confirmed worldwide since early May 2022 when the first case was reported in a British resident who had traveled to Nigeria, an area where monkeypox is considered to be an endemic disease2.

Human monkeypox is a zoonotic disease caused by monkeypox virus, an orthopoxvirus, close relative of variola virus (smallpox)3 . It is a DNA virus, thus the PCR for the detection in various samples is easier than that of an RNA virus such as SARS-CoV-2.

According to CDC4, patients infected with monkeypox usually experience flu-like symptoms such as: fever, headaches, chills, malaise, and lymphadenopathy, followed by the development of a characteristic rash. The symptoms usually burst 3 weeks after contagion. When a person infected with the virus develops flu-like symptoms a rash will usually appear 1 to 4 days later. The rash frequently starts in the mouth rendering it an important site for initial sampling.

Therefore, it is possible that monkeypox may be detected in upper respiratory tract samples (swabs) and saliva 1-4 days before the appearance of the characteristic rash. Moreover, according to Adler H et al.5 “Human monkeypox poses unique challenges, even to well-resourced health-care systems because prolonged upper respiratory tract viral DNA shedding is detected after the skin lesions resolution and this raises the question if it still is contagious. This fact affects the current infection prevention and control guidance.” Therefore, PCR on saliva samples may help detect suspicious cases early in the disease onset but also clarify the possibility that the patient may be infectious even after the resolution of the rush.

The key for controlling monkeypox is early detection, if possible, earlier than the skin rash has developed. This can be accomplished through tests that can be applied as soon as the first symptoms break out and these symptoms are (headache, sore throat, fever, chills etc.) In this aspect, the current research article is very interesting because it tries to elucidate the use of saliva with a PCR as an important means of early mοnkeypox detection. However, the gold standard for diagnosis is a Polymerase Chain Reaction laboratory test, upon the fluid collected from the skin lesions, due to its sensitivity and accuracy6 . If possible, the roof-top from the macule (vesicle or pustule) must be removed and the fluid collected in a dry and sterile tube.

In the current research however, the monkeypox cases were diagnosed only clinically and PCR test on the fluid from the lesions was not performed. The diagnosis therefore was not securely affirmed which is a major weakness. Because of this, the manuscript is considered potentially informative and not yet actionable unless further research is conducted. The idea is novel. The manuscript discusses the limitations that are also mentioned above and the findings contribute to broader research understandings.

1 of 1
Another Supplement to Reviews of: "Laboratory Validation and Clinical Implementation of Human Monkeypox Saliva-Based Tests" 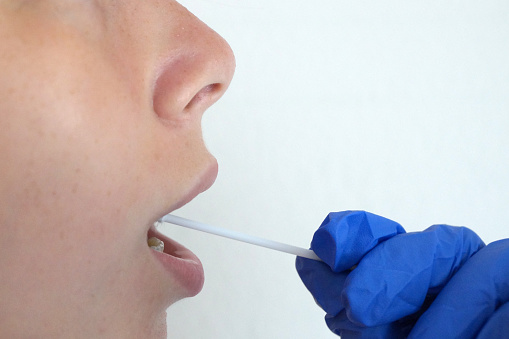